Tim Ryan’s job was killing him.

By the time he was 35, the Democrat was already in his third term in Congress, and he was exhausted. Campaigning, fund-raising, legislating, barnstorming through his swing state for presidential candidates, governors, and senators—it had all taken a toll. So just after the 2008 election, he signed up for a retreat led by Jon Kabat-Zinn, the author of Wherever You Go, There You Are and perhaps America’s foremost popularizer of “mindfulness.” Expecting to de-stress, Ryan ended up having a profound experience that would dramatically affect the course of his career. 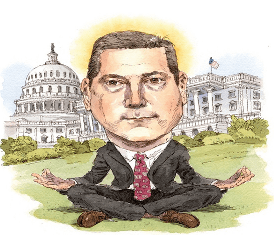 He has sponsored a bill to increase the holistic-medicine offerings of the Department of Veterans Affairs. He has secured a $1 million earmark for relaxation training for elementary-schoolers in his district. He has written a book, A Mindful Nation, that—according to its foreword, by Bill Clinton—purports to “explain how the simple act of self-reflection can help us build a better America.”

Which is how we have come to be here, in the hearing room of the Budget Committee of the House of Representatives—a high-ceilinged chamber with microphones sprouting from dark wood desks and paintings of stern white men lining the walls—for what Ryan has termed a “quiet-time session. ”The assembled group reflects Ryan’s determination to showcase a diversity of meditation practitioners. Billy Birdzell, a fast-talking former marine who’s now a fund-raiser for the National Rifle Association, credits meditation with helping cure his post-traumatic stress disorder. “My cortisol levels are normal, my hormone levels are normal, I sleep great, everything’s fine, I get invited back to parties,” he says.   Read more by clicking the image.