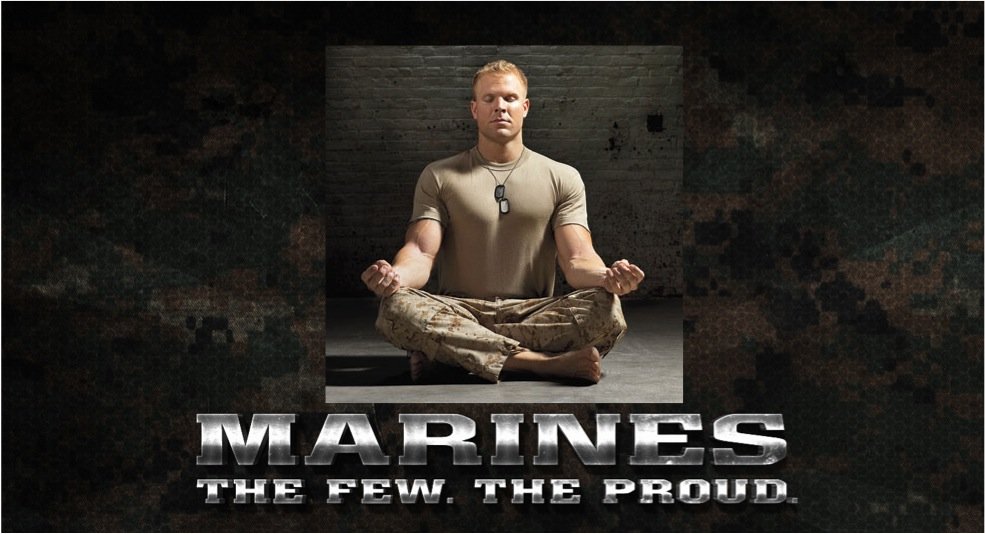 Meditation Fit for a Marine

New Experiments with the Military Affirm the Benefits of Mindfulness

Two summers ago at the Marine Corps Base in Quantico, Virginia, a group of reservists prepared for a tour of duty in Iraq. Twelve-hour days were jammed with rifle qualifications, counterinsurgency training, emergency medical courses, and — last but not least — moments spent in total silence. “You’d see men sitting in the lotus position in their field uniforms with rifles across their backs,” recalls Major Jason Spitaletta. The Marines were part of a study, partially funded by the Department of Defense, testing what’s best described to the layperson as meditation’s potential to increase the mind’s performance under the duress of war.

Spitaletta, a psychology graduate student in civilian life, had persuaded his commanding officer to participate after reading a provocative briefing sent to the Defense Advanced Research Projects Agency. In the paper, an ex–Army officer named Elizabeth Stanley illustrated meditation’s effect on emotions, which could help healthy soldiers stay calm and alert in chaotic situations — like the aftermath of an IED explosion.

Researchers tested the Marines for something called “working memory capacity,” a term that brain scientists use to define a cognitive resource that is much more than simple recall. Working memory capacity powers complex thoughts. It’s what we call upon to figure out restaurant tips, break down spreadsheets, or even settle ethical dilemmas like whether or not to pull a trigger. The level of this resource can be depleted throughout the day. A morning disagreement with a co-worker — or a roadside bomb for that matter — can make it harder to solve a problem that requires math skills a few hours later in the day. In the battlefield low levels of working memory capacity might mean the difference between life and death. . . . Read the full article in Men’s Journal here!